The Muhammad Ali celebrity doll was brought out by Starting Lineup in the Timeless Legends series in 1997 and was manufactured by Hasbro.  The Muhammad Ali 12 inch action figure also came in a set with a Joe Frazier doll called “Ali vs Frazier”.

Muhammad Ali was three-time World Heavyweight Champion and considered one of the greatest heavyweight championship boxers of all time.  He won a gold medal for the USA as a light heavyweight in the 1960 Olympic Games. Ali died in 2016 at the age of 74.

The Muhammad Ali action figure comes wearing white satin boxing shorts with black trim.  The hands are orange boxing gloves and the white boxing boots are part of the doll’s body/leg and are not removable. A white terry cloth robe is included complete with terry cloth belt and Muhammad Ali embroidered with black thread on the back.

The doll is 12 inches tall and pose-able.  The legs are rubbery and the knees bend with wired clicking inside.  The ankles are fixed. Hips rotate completely and the doll can do the splits in either direction.  The elbows and wrists bend somewhat and the upper arms and shoulders rotate.  The head only moves side to side, no tilt. 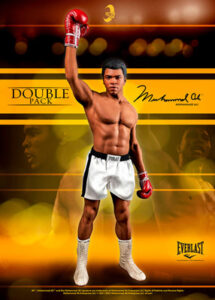 While not featured in the museum, Sideshow has the Muhammad Ali Figure on pre-order. first of the One Sixth Scale Legend Series.

The Celebrity Doll Museum has an affiliate account with Sideshow.